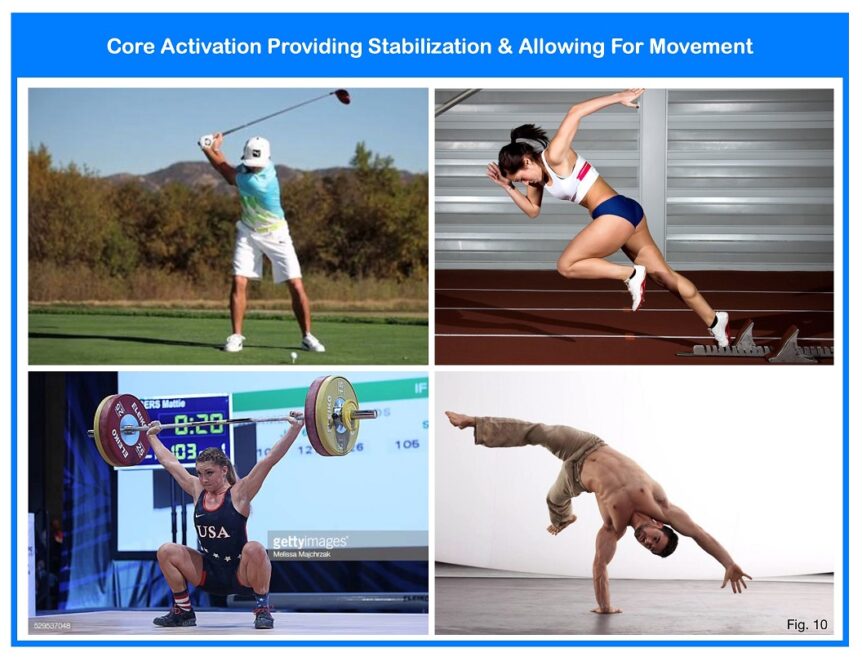 Part 1 of this series discussed the anatomical structure and function of the core.    Here is a brief review of what was covered:

We will now turn to the pros and cons of two diametrically opposing theories of core activation that are commonly used today.

Voluntary Activation of the Core

The core is meant to function like a well orchestrated ensemble of instruments.  Each part has a specific function and rules with which to function.  They must work together within the confines of these rules to stabilize the lower back and pelvis effectively.  Imagine an orchestra made up of all the best musicians in the world.

What if each member, thinking they were the most important, played only what they wanted.  What if the musicians never practiced together as a group.  When the orchestra assembled, the symphony would sound appalling.  To make a beautiful symphony, every member of an orchestra has to play its part according to the conductor.  There is no “most important” instrument in an orchestra and every part of an orchestra has to play together to make a symphony of music.  The same is true for the core.  Each part of the core has a specific role in creating spinal stability.  Efficient stabilization will occur only when the individual parts coordinate to function together. One of the dominant core activation strategies, developed by Paul Hodges and his Australian group, involves the isolation and pre-activation of a single component of the stabilizing system to create abdominal hollowing.  Another approach, created by Stuart McGill of University of Waterloo, advocates activating the core to create a brace.

Core stabilization more or less started with the theory of the transversus abdominis and abdominal hollowing exercises.  Research by Hodges et al showed that in healthy individuals the transversus abdominis (TvA) is activated prior to any voluntary movement of the limbs occurring.  Their research also demonstrated that some people with chronic back-problems had delayed activation of the TvA and multifidus muscles.

Suddenly all exercises were supposed to be performed with abdominal hollowing to activate the core.  The proponents of abdominal hollowing made a fundamental error.  They assumed that the TvA was “turned off” and isolating the muscle with a strong concentric contraction would naturally activate core and improve stability.  The only time one would find a TvA that is “turned off” is if the patient were dead.  The muscle is never “off”.  Its activation is only delayed.  That is, for people with chronic back problems the TvA activates after movement occurs.  Stability must be provided before any movement is initiated.  Abdominal hollowing relies heavily on one muscle.

The hollowing technique produces a very strong contraction of the TvA as intended.  However, isolation of the TvA causes the oblique abdominals to become inhibited thus muting their contribution to spinal stability.  The hollowing technique made TvA king over all the other members of the “core” kingdom.  This goes against how the body naturally functions.  History has taught us that muscles in a group are designed to function as a group.  History has also taught us that isolation exercises can improve a muscle’s anatomical strength, however, that strength gain does not translate into improved function or stability.  The most significant detriment of hollowing is its effect on the timing function of the diaphragm.   Activation of the diaphragm is meant to precede that of the TvA and not the other way around.  Secondly, hollowing prevents the diaphragm from descending.  Try hollowing your abdomen and then take in a deep breath- it cannot be done.  If the diaphragm cannot descend, then intra-abdominal pressure cannot be increased.  As noted previously, increased IAP is fundamental to core stability.  As is so frequently the case, just because an idea or strategy is prevalent does not make it right or the best choice.  Suffice it to say, the abdominal hollowing method or pulling your navel toward your spine does very little to improve stability by any meaningful measure.

Next in the evolution of core activation theory is the work of one of Canada’s own, Dr. Stu McGill and his “abdominal brace”.  His theory supposed that rather than hollowing, one should be trying to create an abdominal brace as a means of stabilizing.

McGill’s method involves generating super stiffness that is generalized throughout the lumbopelvic region.  His abdominal brace technique does not focus on isolating any specific muscles nor is it concerned with muscle sequencing.  Basically, everything is maximally tightened all at the same time. This is both a positive and a negative.  Dr. McGill has even developed his favourite exercises with progressions to retrain the stabilizing system.  The McGill “Big 3” are: the supported crunch, the side bridge and the bird dog.  The shortcomings of Dr. McGill’s core theory is not with his choice of exercises but rather, it is related to timing, degree of stiffness and spinal compression.  His super stiffness approach to core training ignores the fact that there is a sequence of activation.  As noted above, Dr. McGill’s approach activates the core and the main support muscles outside of the core all at the same time.  The lats, gluteals, back erectors are all activated along with the TvA, oblique abdominals, pelvic floor and the diaphragm.  Numerous studies have shown that core stabilization is initiated by the diaphragm descending within the thorax.  The increased IAP that develops pushes outward on the abdominal wall causing them to stretch.

In response to the stretch placed upon them, the oblique abdominals, TvA, lumbar multifidus and pelvic floor muscles contract eccentrically and then hold isometrically.  Over-bracing also wreaks havoc on people who suffer with an incompetent pelvic floor.   Breath holding that usually accompanies a brace will overwhelm a weak pelvic floor reducing pelvic stability, causing leaks and promoting organ prolapse.  Caution must be taken to ensure that one continues to breathe while maintaining their brace throughout an exercise movement or hold.  Additionally, his model does not integrate the stabilizers of the neck, not does it incorporate foot stability.  His method of activation is correct but the overall stabilization strategy is incomplete.  This deficiency allows for the perpetuation of both compensatory stabilization strategies and faulty movement patterns.  Either one of these creates inefficiency and there are significant consequences to inefficiency.

Dr. McGill’s super stiffness activation model is not an all-or-nothing concept.  It is designed to be a graduated level of activation that matches the implied demand.  Dr. McGill calls it “tuning”.  Ideally, the amount of stabilization created should be “tuned” to match the task.  Lifting 10kg bag of vegetables out of the trunk of a car requires considerably more stabilization than standing up from a chair.  Ideally, bracing should be as little as possible but as much as necessary.  Too much bracing will cause increased spinal and disc compression.  Compressive loading over time can lead to all sorts of problems.

As outlined above, Dr. Hodge’s hollowing technique is an overly simplistic and generalized strategy to a highly complex and infinitely variable situation.  His theory strives to isolate one muscle above all others, making it king of the kingdom.  Although hollowing may produce the desired affect of a strong TvA contraction, the outcome does not produce the desired stiffening of the spine and pelvis.

Dr. McGill’s approach is much more natural but it too has its shortcomings.  It assumes that every member of the kingdom are equals and forces them to work as one.  This is not how the system functions in real life.  Any strategy applied to facilitate stability should mimic how the body naturally stabilizes itself.

It should be a graded response that meets but does not exceed an imposed load.  It should incorporate normalized breathing and maintaining perfect postural alignment joint by joint.  It should also allow for an incredibly broad range of controlled mobility rather than restricting movement.  From being able to lift a baby out of crib to doing a one rep max deadlift; from bending down to pickup a pencil off the floor to performing an incredibly complex ballet maneuver; from merely standing in lineup to climbing a mountain, the stabilizing strategy has to be varied and accommodative.

Dr. Morris Gasparin is full body level 1 & 2 Active Release Techniques certified.  He has been incorporating the DNS method of evaluation and rehabilitation since 2012 and been in private practice at Cloverdale Chiropractic since 1995.